skip to main | skip to sidebar

Don't call it a comeback 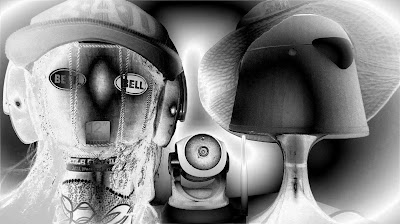 Posted by Dubrobots at 17:57 No comments:

Well, we came, we saw, we played some records, we got a bit drunk, we danced, we went on elsewhere and got a bit more drunk, we felt very poorly this morning. A good night all told.

For those of you who couldn't make it (or those of you who did make it but weren't paying attention), here's part of the Dubrobots Soundsystem set. We've only put up the first half as the second half contained some unfinished remixes that we were road-testing, and we'd like to finish them before putting them online. So look forward to hearing them some time in 2018.

We'll sort out a tracklisting tomorrow, we're very tired this evening for some reason. We've now added a tracklist, and have also uploaded the set to our Mixcloud page, seeing as Soundcloud has been getting a bit delete-y of late. 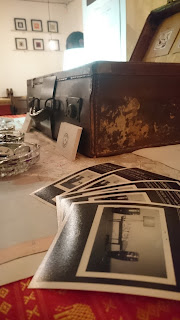 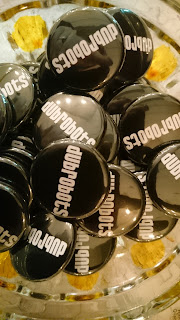 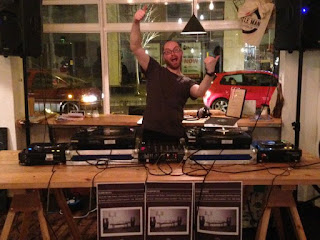 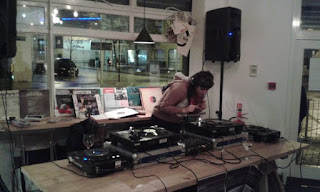 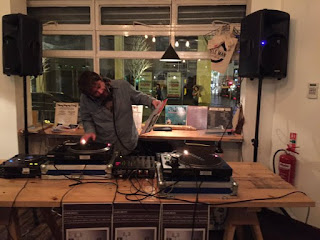 Posted by Dubrobots at 13:02 No comments: 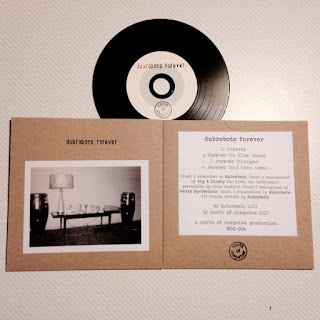 Yes, the big day has arrived at last, Forever is available to buy today.

You can pick up a copy at Spillers Records or Retro-Vibe Records in Cardiff, or Andy's Records in Aberystwyth. Or if you're one of those modern types who has no use for CDs, you can download it from our Bandcamp page. Form an orderly queue*.

And don't forget our launch party tomorrow night (Sat 12th) at The Little Man Coffee Co - more details here. It'll be a blast - DJ sets from Dubrobots Soundsystem (our disc-jockeying human minion), David Mysterious and Hard Hearted Hannah. Still not tempted? Well, what if we tell you that there will be badges? Oh yes. 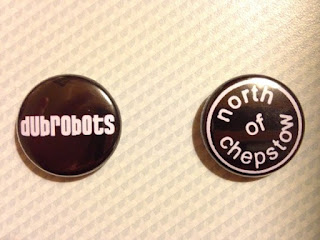 *Yes, you even have to form an orderly queue on Bandcamp. We're sticklers for good manners
Posted by Dubrobots at 02:26 No comments: 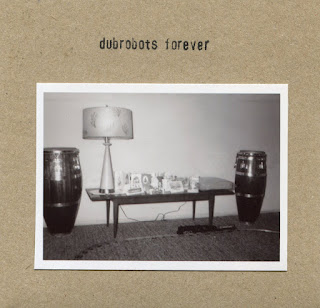 Only one week to go until Forever is released, so we thought now might be a good time to give you the full lowdown.

It's a four track, 27 minute single available at the very reasonable price of £3 (digital) or £4 (CD single). "Gosh, that is reasonable, but what are the four tracks?" we hear you ask. Well, shush a minute and we'll tell you...

Track one is the original version, crafted by our own fair robotic hands. The radio edit is available to listen to here, but if you buy the single you'll get it in all its 7 minute glory.

Track two is a radical overhaul by underground London-based dubsters Wry & Slobby. We were going to try to describe it ourselves, but realised we couldn't put it better than Swiss Adam over at the wonderful Bagging Area blog - "This remix by Wry and Slobby takes it even further and actually sounds like dub made by funky robots. The robots keep a human horn player as their underling. Occasionally they order him to play the horn, which drifts in and out in a Ghost Town sort of manner. The robotic bassline could make kitchen white goods join in the dance". Don't believe him? Listen to it here and judge for yourself.

Track three is something different again. We asked wayward pop maverick (and North of Chepstow labelmate) David Mysterious to sprinkle some of his enigmatic magic over the track, and what we got in return was exactly what we expected - i.e. not what we expected at all. Is it a remix? Is it a cover version? Is it a completely new David Mysterious track loosely inspired by Forever that we're claiming as our own (along with any royalties it might generate)? You decide. It's great though, whatever you want to call it.

For track four we thought "hey, everyone else is remixing this, so why don't we?". So we did.

So there you are, all filler no killer (is that right?)

"So where can we buy it?" (we didn't hear you ask this time, but in fairness a train just went past and it was pretty loud, but logic dictates that you must have asked). Well, if you want a digital copy, you can order it from our Bandcamp page. It will be released at midnight on Friday 11th December, and is available to pre-order now. If you'd like a CD, then you can pick up a copy from Spillers Records, Retro Vibe Records (both in Cardiff), and Andy's Records Aberystwyth. We don't know if they're opening at midnight especially, we'll check.

Alternatively, you can buy copies at the single launch night - Saturday 12th Dec at Little Man Coffee Co in Cardiff. The festivities start at 7pm and there will be DJ sets from the aforementioned David Mysterious, Hard Hearted Hannah of the fabulous Thee Manatees, and of course, the disc-jockeying arm of our operation, Dubrobots Soundsystem. We'll be playing the single and much much more (obviously if we just played the single all night, it would get a bit boring). And as if that doesn't sound tantalising enough, it's free entry - come on down, the price is right. More info here, for those of you who do the Facebook thang.

We think we may have broken the record for the most links in one blogpost. To commemorate this stunning achievement, we've decided to run a competition. The first person to click all the links wins a prize, maybe a badge or something. We've got a British Heart Foundation one knocking about, and we might still have a He-Man one somewhere. Answers on a postcard please. Terms and conditions apply. The white zone is for loading and unloading only. 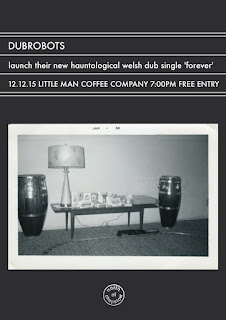 Posted by Dubrobots at 07:03 No comments:

The wait is finally over. You can move back from the edges of your seats to a more comfortable sitting position and enjoy our new single "Forever" (or not enjoy it, according to personal preference).


It's available to buy from the 11th December, via the good people at North Of Chepstow Records, and digitally via our Bandcamp page - https://dubrobots.bandcamp.com/releases (you can pre-order it now).

There's also a video for those of you out there in digital-land who like visuals with your music. You can see that here.

We'll tease you with further info and other titbits over the next few weeks, so you'll probably end up slowly moving to the edges of your seats again, sorry.

Oh yes, we now have a Twitter account too - https://twitter.com/dubrobots. We are apparently @dubrobots. If you came to this page via Twitter, you'll already know this, and if you click that link you'll just end up going round and round in a Groundhog Day-style feedback loop for all eternity (or until you stop clicking the links, whichever comes soonest).

See ya later punking instigator!
Posted by Dubrobots at 08:29 No comments: 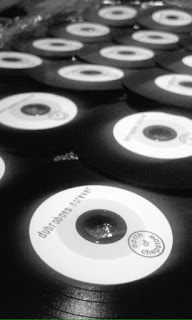 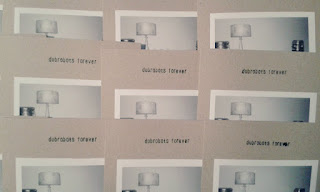 Posted by Dubrobots at 16:08 No comments: 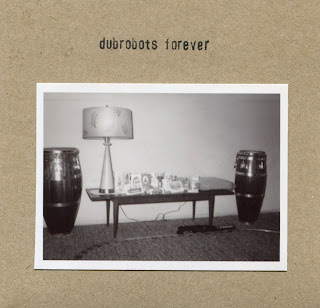 As promised, we have some exciting news for you. We've teamed up with the lovely people at North of Chepstow Records to release our new single "Forever". It's being released on 11th December as a digital download and limited edition vinyl-replica CD. Want to hear it? Well you can't yet, but stay tuned - good things come to those who wait.

To celebrate this momentous occasion, we're holding a launch party at the Little Man Coffee Company in Cardiff on Saturday 12th December. There will be DJ sets from Dubrobots Soundsystem, as well as labelmates Hard Hearted Hannah (Thee Manatees) and David Mysterious (David Mysterious). If that doesn't sound tempting enough, it's free! Yes, you're all on the guest list with a plus one (we say "all", we may have to check the venue's capacity).

For those of you who like to live your life through the prison prism of social media, there's a Facebook "event" here. Our record label are promising a snazzy time, and we have no reason to doubt them. 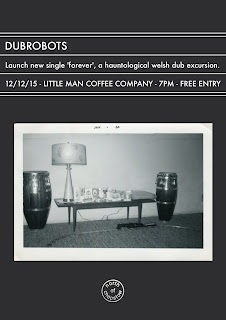 Posted by Dubrobots at 03:47 No comments: 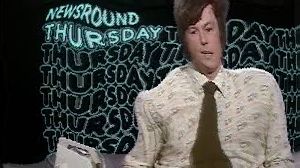 Stay tuned for some exciting news in the next few weeks...

And yeah, we know it's not Thursday today*, but we couldn't find a picture saying Tuesday


* - unless you happen to be reading this on a Thursday, then it is

Posted by Dubrobots at 10:57 No comments: 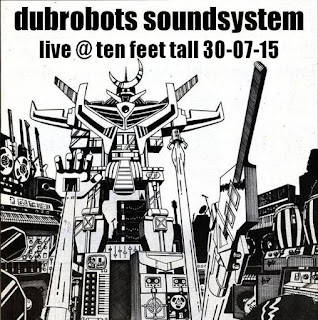 For those of you who missed it, or those who were there and want to relive the giddy euphoria, we've uploaded our set from last night's show with The Feminists and Thee Manatees.

So here's an hour and a half of dynamite dub disco dancefloor action. Or something.

Oh, and thanks to the lovely Strictly Kev who originally found, scanned and posted the above picture that we pinched without so much as a by your leave. It's cultural appropriation, innit? 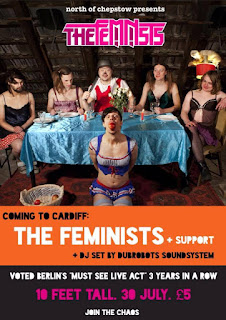 No, we don't mean we support equality for women*, but we will be performing a DJ set supporting this bunch of maniacs at 10 Feet Tall in Cardiff on Thursday 30th July. The evening is being hosted by the lovely people of the North Of Chepstow collective, and there will be another support act from their roster (details TBC). And all this for only a fiver! Be there or be square, as the kids are all saying these days**.


* - we'd like to point out that we do, before any hard-of-thinking Twitter users start a shitstorm of outrage
** - or they were, last time we checked (circa 1974)
Posted by Dubrobots at 11:24 No comments:

This is the place to come for music, news, thoughts, theories and rants from Dubrobots. All music posted here will be free to download, though some may only be available for a limited period, so be sure to check this page frequently. If you're interested, that is. If you're not, then don't bother, you'll just be wasting your time.

There are always a few tracks to listen to on our Youtube, Soundcloud and Mixcloud pages (some of them exclusives), and we even update them with new stuff occasionally.